This is a story from Panchtantra  ( पञ्चतन्त्र ) , the story is called as क्षपणक – कथा ( story of  Jain monks of digambar sect)

A man should not perform actions without proper seeing, proper knowing, proper listening  and proper testing. Otherwise he will do what the barber has done to Jain monks.

Objects which others have acquired by their virtues ( good deeds ), I will also get them one should not think that, because due to excessive greed a barber died after killing a beggar

Once, in the town of Patliputra, there lived a merchant named Manibhadra. He was a rich and charitable man. But once, misfortune struck him and he lost all his wealth. He became poor and his social status also diminished. He became very depressed. 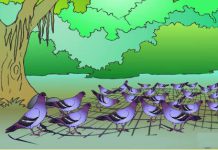 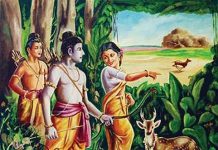