Home Vedas The avataras of Manu, or manvantara

Following is a description of the fourteen Manus who are prominent within the present universe, which has a duration of 4,300,000,000 solar years. Almost all the Manus selected to rule the manvantaras came from the family of Maharaja Priyavrata.

Yajna came as Svayambhuva Manu, the son of Lord Brahma. Krsna incarnated as Varaha during this age. Svayambhuva Manu and his wife Satarupa had two daughters, named Akuti and Devahuti. From their wombs, the Supreme Personality of Godhead appeared as two sons named Yajnamurti and Kapila respectively. These sons were entrusted with preaching about religion and knowledge.

Manu himself, his sons Priyavrata and Uttanapada, the demigods created by Daksa, and the rsis like Marici were all partial incarnations of the Lord during the reign of Svayambhuva Manu. During that time, the incarnation of the Lord as Yajna took charge of ruling the heavenly planets.

Svayambhuva Manu performed great austerities by standing on one leg on the bank of the River Sunanda for one hundred years. During this time he was in a trance, chanting the mantras of Vedic instruction known as the Upanisads.

Vibhu came as Svarocisa Manu, the son of Svarocih, or Agni. His several sons were headed by Dyumat, Susena and Rocismat. During the reign of Svarocisa, the post of Indra was assumed by Rocana, the son of Yajna. Tusita and others became the principal demigods, and Urja, Stambha and others became the seven saints. All of them were faithful devotees of the Lord. Vedasira was a very celebrated rsi. From the womb of his wife, whose name was Tusita, came the avatara named Vibhu. Vibhu remained a brahmacari and never married throughout his life. From him, eighty-eight thousand other saintly persons took lessons on self-control, austerity and similar behavior.

Satyasena came as Uttama Manu, the son of King Priyavrata. Among the sons of this Manu were Pavana, Srnjaya and Yajnahotra. During the reign of the third Manu, Pramada and other sons of Vasistha became the seven sages. The Satyas, Vedasrutas and Bhadras became demigods, and Satyajit was selected to be Indra, the King of heaven.

In this manvantara, the Supreme Personality of Godhead appeared from the womb of Sunrta, who was the wife of Dharma, the demigod in charge of religion. The Lord was celebrated as Satyasena, and He appeared with other demigods, known as the Satyavratas.

Satyasena, along with His friend Satyajit, who was the King of heaven, Indra, killed all the untruthful, impious and misbehaved Yaksas, Raksasas and ghostly living entities, who gave pains to other living beings.

Hari came as Tamasa Manu, the brother of Uttama. Tamasa had ten sons, headed by Prthu, Khyati, Nara and Ketu. During the reign of Tamasa Manu, among the demigods were the Satyakas, Haris and Viras. The heavenly King, Indra, was Trisikha. The sages in saptarsi-dhama were headed by Jyotirdhama. O King, in the Tamasa manvantara the sons of Vidhrti, who were known as the Vaidhrtis, also became demigods. Since in course of time the Vedic authority was lost, these demigods, by their own powers, protected the Vedic authority.

Also in this manvantara, the Supreme Lord, Visnu, took birth from the womb of Harini, the wife of Harimedha, and He was known as Hari. Hari saved His devotee Gajendra, the King of the elephants, from the mouth of a crocodile.

Vaikuntha came as as Raivata Manu, the twin brother of Tamasa. His sons were headed by Arjuna, Bali and Vindhya. O King, in the millennium of Raivata Manu the King of heaven was known as Vibhu, among the demigods were the Bhutarayas, and among the seven brahmanas who occupied the seven planets were Hiranyaroma, Vedasira and Urdhvabahu. From the combination of Subhra and his wife, Vikuntha, there appeared the Supreme Personality of Godhead, Vaikuntha, along with demigods who were His personal plenary expansions. Just to please the goddess of fortune, the Supreme Personality of Godhead, Vaikuntha, at her request, created another Vaikuntha planet, which is worshiped by everyone. This Vaikuntha is within the universe. It is situated above the mountain known as Lokaloka. This planet is worshiped by everyone.

After the Lord’s personal bodyguards Jaya and Vijaya became Daityas, having been cursed by the great sages Sanaka, Sanatana, Sanat-kumara and Sanandana, Jaya, as Hiranyaksa, had to fight with Varahadeva. That same Varahadeva is mentioned in regard to the Raivata millennium. The fighting, however, took place during the reign of the first Manu, Svayambhuva. Therefore according to some authorities there are two Varahas. According to others, however, Varaha appeared during the regime of Svayambhuva Manu and stayed in the water until that of Raivata Manu. Some may doubt that this could be possible, but the answer is that everything is possible. If one could count the atoms within the universe, one could count the qualities of Lord Visnu. But the atoms of the universe are impossible for anyone to count, and similarly no one can count the transcendental qualities of the Lord.

Ajita came as Caksusa Manu, the son of the demigod Caksu. He had many sons, headed by Puru, Purusa and Sudyumna. During the reign of Caksusa Manu, the King of heaven was known as Mantradruma. Among the demigods were the Apyas, and among the great sages were Havisman and Viraka. In this sixth manvantara millennium, Lord Visnu, the master of the universe, appeared in His partial expansion. He was begotten by Vairaja in the womb of his wife, Devasambhuti, and His name was Ajita. By churning the ocean of milk, Ajita produced nectar for the demigods. In the form of a tortoise, He moved here and there, carrying on His back the great mountain known as Mandara.

Vamana came as Vaivasvata Manu, the son of Vivasvan, the sun-god (whose name is also mentioned in Bhagavad-gita.) The present Manu, Vaivasvata, has already lived for 4,320,000 years multiplied by 28, or 120,960,000 years. In other words, we are in the twenty-eighth millennium of Vaivasvata Manu.

The seventh Manu, who is the son of Vivasvan, is known as Sraddhadeva. He has ten sons, named Iksvaku, Nabhaga, Dhrsta, Saryati, Narisyanta, Nabhaga, Dista, Tarusa, Prsadhra and Vasuman. In this manvantara, or reign of Manu, among the demigods are the Adityas, Vasus, Rudras, Visvedevas, Maruts, Asvini-kumaras and Rbhus. The king of heaven, Indra, is known as Purandara, and the seven sages are known as Kasyapa, Atri, Vasistha, Visvamitra, Gautama, Jamadagni and Bharadvaja. During this period of Manu, the Supreme Personality of Godhead Visnu appears from the womb of Aditi in His incarnation as the son of Kasyapa.

Sarvabhauma comes as Savarni Manu, a son born to the sun-god and wife named Chaya. Savarni’s sons are headed by Nirmoka, and among the demigods are the Sutapas. Bali, the son of Virocana, is Indra, and Galava and Parasurama are among the seven sages. In this age of Manu, the incarnation of the Supreme Personality of Godhead appears as Sarvabhauma, the son of Devaguhya and Sarasvati.

Visvaksena comes as Brahma-savarni Manu, the son of Upasloka. Among Brahma-savarni’s sons is Bhurisena, and the seven sages are Havisman and others. Among the demigods are the Suvasanas, and Sambhu is Indra. The incarnation in this period of Manu is Visvaksena, who is a friend of Sambhu and who is born from the womb of Visuci in the house of a brahmana named Visvasrasta.

Dharmasetu comes as Dharma-savarni Manu, the son of Ruci. Dharma-savarni has ten sons, headed by Satyadharma. Among the demigods are the Vihangamas, Indra is known as Vaidhrta, and the seven sages are Aruna and others. In this manvantara, the incarnation is Dharmasetu, who is born of Vaidhrta and Aryaka.

Sudhama comes as Rudra-savarni Manu, the son of Rudra. Rudra-savarni’s sons are headed by Devavan. The demigods are the Haritas and others, Indra is Rtadhama, and the seven sages are Tapomurti and others. The incarnation in this manvantara is Sudhama, or Svadhama, who is born from the womb of Sunrta. His father’s name is Satyasaha.

Brhadbhanu comes as Indra-savarni Manu, the son of Bhuti. Among Indra-savarni’s sons are Uru and Gambhira, the demigods are the Pavitras and others, Indra is Suci, and among the sages are Agni and Bahu. The incarnation of this manvantara is known as Brhadbhanu. He is born of Satrayana from the womb of Vitana. 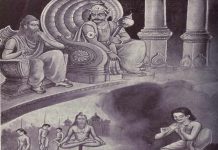 Do we take rebirth after death and pass through the cycle of 8.4 million species?

What is correct number of Hindu Gods ?

Earth existed before you were born

Every suffering presupposes my current condition as real.