Home Vedanta What are Upanishads ? 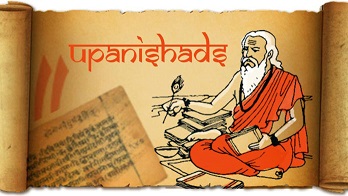 The Upanishads were originally called Vedanta, which literally means the conclusion to the Vedas. The number of Upanishads is given as 108

Upanishads include episodes, commentaries, stories and dialogue, through which it unfold about creation, the Jiva and the Atman.

The principal Upanishads are :

The Brhad-aranyaka Upanishad is widely accepted to be the most important of all Upanishads. It has three khandas or parts. The madhu khanda contemplates on the relationship between the individual and the Universal self. The muni khanda or yajnavalkya is a debate which goes on to give the philosophical backing to the earlier teaching. The khila khanda tackles various rituals of worship and meditation.

This Upanishad is a part of the Sama-Veda. The name comes from the singer of the songs (samans) who is called Chandoga. The initial chapters of the Upanishad, discuss the ritual of sacrifice. The others debate the origin and profundity of the concept of Om, among other things.

This one forms part of the Rig-Veda. The purpose is to make the reader understand the deeper meaning of sacrifice and to take him away from the outer trappings of the actual act.

A part of the Yajur-Veda, this Upanishad is divided into three sections or vallis. The siksa valli deals with the phonetics of the chants, while the others, brahmananda valli and bhrgu valli deal with self-realization.

Also called the Isavasya Upanishad, this book deals with the union of God, the world, being and becoming. The stress is on the Absolute in relation with the world (paramesvara). The gist of the teachings is that a person’s worldly and otherworldly goals need not necessarily be opposed to each other.

The name of this Upanishad comes from the first word kena, or by whom. It has two sections of prose and two of poetry. The verses deal with the supreme spirit or the absolute principle (brahmaana) and the prose talks of ishvara (god). The moral of the story is that the knowledge of ishvara reveals the way to self-realization.

Also called the Kathakopanishad, this Upanishad uses a story (katha) involving a young Brahmin boy called Nachiketa to reveal the truths of this world and the other beyond the veil.

Prashna literally means question, and this book is part of the Athrava-Veda. It addresses questions pertaining to the ultimate cause, the power of Om, relation of the supreme to the constituents of the world.

This book also belongs to the Atharva-Veda. The name is derived from ‘mund’ or to shave, meaning that anyone who understands the Upanishads is saved from ignorance. This book inscribes the importance of knowing the supreme brahmana, only by which knowledge can one attain self-realization.

The Mandukya is an exquisite treatise which expounds on the principle of Om and its metaphysical significance in various states of being, waking, dream and the dreamless sleep. The subtlest and most profound of the Upanishads, it is said that this alone will lead one to the path of enlightenment.

The name of this Upanishad is after its teacher. It comments on the unity of the souls and the world in one all-encompassing reality. The concept of there being one god is also talked about here. It is dedicated to Rudra, the storm god.

What happens after a person attains Moksha? Does the soul live permanently in heaven with the gods? What karma does the soul perform after...