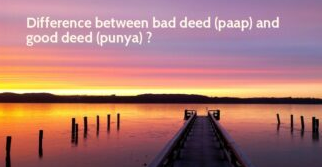 If this question is asked to Vedanta follower, than the answer is that there is no good or no bad.

Every action in this world, presuppose a physical body ( as doer ). According to Vedanta actions are performed with the belief that “I am doing a thing”

Here “I” is the Atman, and the Physical body is the instrument to act. Like a person without hands, he can desire to do actions but there is no instrument to do ( as hands are not there)

What makes Atman as doer ? It is the Maya, due to which it considers the physical body as its real identity and it thinks that i am doing good or bad.

But Atman is never a doer, nor any actions affect it. As mentioned in B.G ch 18 verse 17

Those who are free from the false ego of being the doer, and whose intellect is unattached, though they may slay living beings, they neither kill nor are they bound by actions.”

Second thought on this is that as per Vedanta, this world is not real. It is similar to dream state, where you perform actions with the belief that dream world is real. But when you wake-up, there was no real world, no real actions and no real doer.

Similarly this waking world is also not real, but it is believed to be true.