Home Hinduism How Dhanushkodi got its name ? 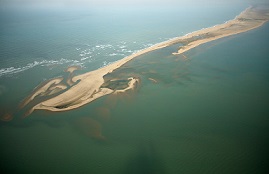 Dhanushkodi is an abandoned town at the south-eastern tip of Pamban Island of the state of Tamil Nadu in India. It is south-east of Pamban and is about 24 kilometres west of Sri Lanka. The town was destroyed during the 1964 Rameswaram cyclone and remains uninhabited in the aftermath.

How Dhanushkodi got its name ?

कोटिः  means the curved end of a bow

When Rama had killed Ravana and made Vibhishana as new ruler of Lanka, than he along with Sita, Sugriva and Vibhishana went on to Gandhamadana mountain. Vibhishana there requested Lord Rama that you please dismantle this bridge ( Ram – Setu ) using your sharp edge of your bow (धनुष्कोटि), otherwise various rulers will find easy to invade Lanka.

Since it was broken by Rama using sharp edge of his bow (धनुष्कोटि), therefore it is known as Dhanush Koti (धनुष्कोटि)

Who was Parashurama ? Why did he kill his mother?