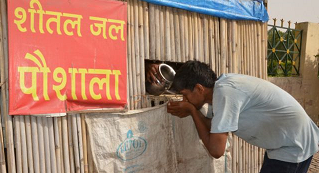 In Ancient times, there was king called Vasusena (वसुषेण​) who ruled over Anartadesh (आनर्तदेश).When he become old and was about to die, his ministers made his son Satyasena (सत्यसेन) as new king. Vasusena has donated throughout his life and because of that after his death charioteer of Lord Indra came to take him to Swarga Loka.

When he started living in Swarga, he realized that he is feeling continuous hunger and his mouth is always thirsty for water. He soon approached Lord Indra and said – “O king of Swarga, I am suffering here due to hunger and thirst, what is the reason for it ? and what should I do with comforts, dress, ornaments offered here to me, if my hunger and thirst id not satisfied.”

When Indra and Vasusena were talking, Rishi Narada came there. Narada said that I am going to earth for pilgrimage, so Vasusena requested Narada to tell his son that he should start donating sweets , cereals and food to brahmans , so that his father in heaven be satisfied with his offerings.

Rishi Narada agreed to convey the Vasusena message to his son. During the course of his pilgrimage on earth Narada visited the Satyasena and conveyed the message to him.

Satyasena soon started donating sweets, food and cereals to millions brahmans daily. He built many place to provide water to the people specially during summer season. But soon to Satyasena faced wrath of rain god, for twelve continuous years there was no rain, due to which crops were not produced.

Satyasena on advice of his minister went o Hatakeswara (हाटकेश्वर) region and start praying to Lord Shiva. He stayed there for one years and worshiped Shiva. When Lord Shiva came to visit him.

“He asked that rain should start coming on earth and so that crop can grow and water can be available to the living beings. My father who stays in Swarga should be devoid of his suffering due to hunger and thirst “