Home Hinduism What is Guru Purnima ? Why it is celebrated ? 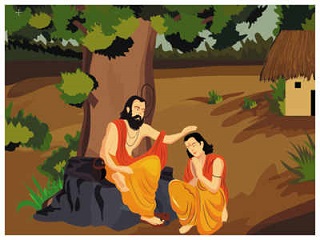 Guru Purnima will be celebrated on the 24th (Saturday) of July 2021, it is also the birth anniversary of Veda Vyasa. This event is celebrated to honor one’s chosen spiritual teachers or guru.

Guru is that light that guide an individual or a seeker towards the knowledge. The celebration of Guru Poornima is marked by spiritual activities or event in honor of the Guru.

The Ashada Full Moon Day is called as Vyasa Purnima, since it was on this full moon day that Veda Vyasa was born. Rishi Parashara was his father and Satyavati was his mother.

That Brahmana, who performs Garbhadhana (गर्भाधान) rites as per the shastra, and provides food to the child studying under him is called the Guru.

In all of these four the Guru has highest place, followed by Acharya, Upadhyaya and Ritwik , but mother is considered as highest among all four of them.

Gu-गु stands for darkness (ignorance) and Ru-रु means light. The light which eliminates the ignorance is called as Guru. There is no doubt in it.

Veda Vyasa is the author of Mahabharata, Puranas and the Vedanta Sutra. Rishi Vyasa came to be called as Veda Vyasa because he divided the Vedic literature into four parts and naming them as Rig Veda, Yajur Veda, Sama Veda and Atharva Veda (विव्यास वेदान् यस्मात् स तस्मात् व्यास इति स्मृतः)

According to scriptures, Vyasa is a title or a portfolio and in every Dwapara Yuga, different persons occupy the seat of Vyasa. Author of Mahabharata is the 28th Vyasa in the lineage and he is called as Krishna Dvaipayana (कृष्णद्वैपायन). In the next Dwapara yuga, Ashwaththama (अश्वत्थामा ) will ascend the seat of Vyasa, according to Devi Bhagavata and Vishnu Purana.

He was named Krishna Dvaipayana (कृष्णद्वैपायन) since he was born in a dark island situated in Yamuna River; he came to be known as Badarayana (बादरायण) for residing in a hermitage in Badari.