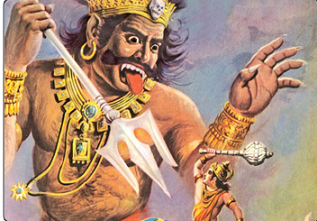 It is mentioned in Bhagavata Purana- Sixth Skanda- chapter 14-17, when King Parikshit (परीक्षित) asked Sukhdev (शुकदेव) – Why Vritrasura (वृत्रासुर) after being a demon, he is still so devoted to Lord Vishnu ?

Sukhdev started the story of King Chitraketu, who was a great devotee of Vishnu but due a curse he was born as Vritrasura (वृत्रासुर).

Chitraketu (चित्रकेतु) was a king who ruled over kingdom of Sursena. Though he had one crore wifes, but still he has not become a father. Once Rishi Angira (अंगिरा) came to his kingdom, and was served by the king with great devotion. King Chitraketu wanted a son, so he told this to rishi Angira. Rishi Angira than performed a yagna and gave the sacred food to his queen named as Kritadyuti (कृतद्युति).

Rishi Angira said to the King, “O great King, now you will have a son who will be the cause of both happiness and misery” (राजन् भवितैकस्तवात्मज: हर्षशोकप्रदस्तुभ्यमिति)

Soon he was blessed by a son. When king Chitraketu (चित्रकेतु) got attached to his son, and the queen Kritadyuti (कृतद्युति), the other queens cannot bear it and become jealous. As their envy increased, they lost their intelligence and unable to tolerate the King’s neglect, they finally gave poison to the newborn son.

When King Citraketu heard of his son’s death, he became almost blind, due to his great affection for his son, he is surrounded by great agony and pain.

When the great sage Angira(अंगिरा) understood that the King was almost dead in an ocean of misery, he went there with Rishi Narada.

The great saints Angira and Narada explained him that the relationship between father and son is not factual; it is simply an illusion caused by Maya. The relationship did not exist before, nor will it stay in the future. One should not suffer due to this temporary relationships. This temporary arrangement is made by the Supreme Lord. Neither the father nor the son exists independently.

As the King listened to the great sages, he was relieved from his false misery. He decide to renounce the word and took sannyasa. Chitraketu made Sumeru mountains as his adobe and he does great tapa there with devotion to Lord Vishnu.

One time while King Chitraketu was traveling somewhere, he saw Lord Shiva, surrounded by assembly of great saint and also embracing Parvati on his lap with his arm. Chitraketu laughed loudly and spoke to the assembly.

Hearing this words of Chitraketu, though Lord Shiva remain silent, but goddess Parvati got angry and cursed him – “O fool, now take birth in a low, sinful family of demons so that you will not commit such an offense again toward saintly persons”

Being cursed by mother Parvati , that same Chitraketu accepted birth as Vritrasura. Although still fully equipped with transcendental knowledge and his devotion towards Lord Vishnu. He appeared as demon from the fire of yagna performed by Tvashta (त्वष्टा), and thus he became famous as Vritrasura (वृत्रासुर).