Home Hinduism Who are the sons of Lord Brahma ? 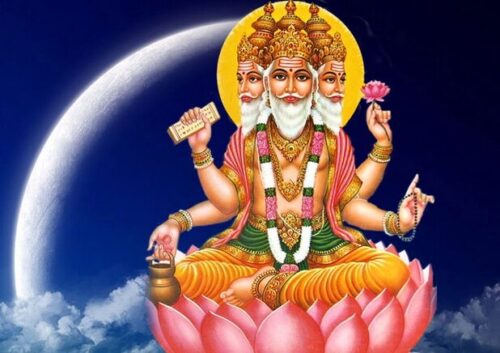 The name and number of sons are different as per the different scriptures. According to Srimad Bhagavat Purana, Rudra (रुद्र) were born from Lord Brahma who are eleven in number.

Before the birth of Manu and Shatrupa, sex as a medium of producing offsprings was not known, therefore the sons were born at will ( तदा मिथुनधर्मेण प्रजा ह्येधाम्बभूविरे)

Following are the name of sons and how they were born :

Brahma created four great sages named Sanaka, Sananda, Sanatana and Sanat-kumara. All of them were unwilling to adopt materialistic activities because they were highly held intelligence.

Religion (धर्म:) was manifested from the chest of Brahmā, wherein is seated the Supreme Personality of Godhead Nārāyaṇa, and irreligion (अधर्म:) appeared from his back, where horrible death takes place for the living entity.

Out of them, the male form became known as the Manu (मनु:) named Svāyambhuva (स्वायम्भुव:), and the female became known as Śatarūpā (शतरूपा:), the queen of the great soul Manu.