Agneyastra (आग्नेय अस्त्र) – It is weapon belong to Agni, god of Fire. The weapon emitted flames inextinguishable through normal means. Arjuna used it against , the Gandharva Chitraratha (चित्ररथ), another name for him is Angaraparna (अंगारपर्ण).

After Arjuna defeated the Gandharva Chitraratha, he gave Agneyastra weapon to him, as mark of friendship between him and Arjuna.

Who all have Agneyastra in Mahabharata ?

This Agneyastra was was given to Rishi Bhardwaj by Guru Brihaspati , who was the guru of Indra. 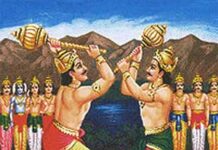