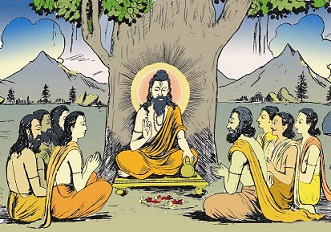 Brihadashva went to the forest Kamyaka (काम्यकवन ) to meet Pandavas, when Yudhishthira (युधिष्ठिर) told rishi that he is not well versed in playing game of dice, because of which he has lost everything and made his family suffered. Rishi Brihadshava told Yudhishthira not to become sad by his suffering and his limited knowledge of game of dice.

Rishi promised that he will teach the game of dice to Yudhishthira and also narrated a story about King Nala (नल) who similarly suffered after losing everything to his brother in the game of the dice.

When Brihadashva had finished the story, he taught Yudhishthira skills of dice game (अक्षविद्या)  and knowledge of horses (अश्वविद्या)