Home Hinduism How did Garuda got his name as Garuda (गरुड)? 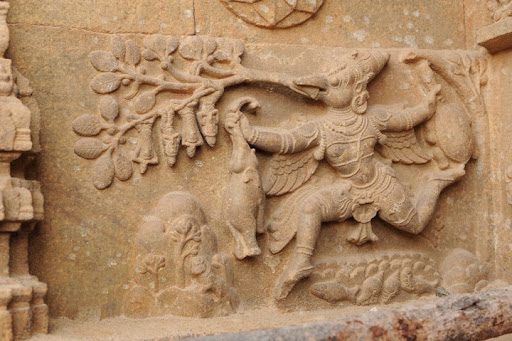 How did Garuda got his name as Garuda (गरुड)?

There his father narrates him a story of elephant and tortoise who use to live in a nearby pond. Garuda’s father tells the Garuda that this elephant and tortoise were two brothers in a previous birth, and had the names Vibhaavasu (विभावसु) and Suprateeka (सुप्रतिक​). They fought for family property and when they remain undecided about the same. They cursed each other, and as a result one brother is born as an elephant and other as tortoise. But the fight, which began in the previous life, still continues!

The two brothers now reborn as animals, so to liberate them from their current birth, sage Kashyapa ask Garuda to eat them.

Garuda comes upon the two animals, and he picked elephant in his one claw and tortoise in another claw and he flews towards Meru Mountain. There he saw a big tree and tried to sit on a branch so that he can eat both of them. But due the weight of Garuda the branch fall off from the tree. So Garuda quickly catches the branch in his peak.

During that time Garuda carried elephant in one claw and tortoise in other claw and also holding the fallen off branch on which Valakhilya Rishis (वालखिल्य) were hanging. Due to this capacity of him to hold & carry heavy weight, he is called as Garuda ( गरुडम् आदाय उड्डीन इति “गरुड:” )

King of Birds and the serpent killer who wanders in the sky and flown with heavy weight, therefore he is called Garuda