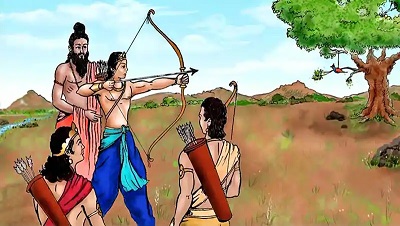 Guru Drona, also known as Dronacharya was the teacher who taught the arts of war to both the Pandava and Kaurava princes.

The birth of Dronacharya is mentioned in Mahabharata, Adi Parva, chapter 165.

Once Rishi Bhardwaj went to a river ganga for taking bath. There he noticed an apsara named Ghritachi who had completed her ablutions and was standing on the banks of the river. Then suddenly strong wind started blowing and stripped the apsara. On seeing the beauty of the Ghritachi, Rishi Bhardwaj was not able to control his desire or lust and he involuntarily emitted his semen. The Rishi than collected this sperm in a clay pot and stored it. Drona was born from that pot.

Dronacharya was well-versed in the science of arms which he learnt from Rishi Parshurama.