Home Stotram What is the meaning of Nasadiya Sukta ?

Nasadiya Sukta also known as the ‘Hymn of Creation’, is the 129th hymn of the 10th Mandala of the Rigveda (10:129). It is highlight the process of creation the origin of the universe.

What is explained by the Nasadiya Sukta ?

It describe the nature of the Brahman from whom this world is originated. Like a wave may rise from water, but water was at peace ( without any distribution ) before a wave  emerges from it.

What is that state where one is peaceful, thoughtless, unaware of this world, unaware of his families & friends, there is no sense of body, no suffering, no breath, no five elements?  that state is “Deep Sleep”, that is what is referred here.

Like a wave ( world ) may rise or may not rise from the water (Brahman) , but water(Brahman) remains unaffected.

Then even nothingness was not, nor existence,
There was no air then, nor the heavens beyond it.
What covered it? Where was it? In whose keeping?
Was there then cosmic water, in depths unfathomed?

Then there was neither death nor immortality
nor was there then the torch of night and day.
The One breathed windlessly and self-sustaining.
There was that One then, and there was no other.

At first there was only darkness wrapped in darkness.
All this was only unillumined water.
That One which came to be, enclosed in nothing,
arose at last, born of the power of heat.

In the beginning desire descended on it –
that was the primal seed, born of the mind.
The sages who have searched their hearts with wisdom
know that which is kin to that which is not.

And they have stretched their cord across the void,
and know what was above, and what below.
Seminal powers made fertile mighty forces.
Below was strength, and over it was impulse.

But, after all, who knows, and who can say
Whence it all came, and how creation happened?
the gods themselves are later than creation,
so who knows truly whence it has arisen?

Whence all creation had its origin,
he, whether he fashioned it or whether he did not,
he, who surveys it all from highest heaven,
he knows – or maybe even he does not know. 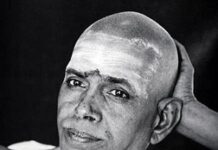 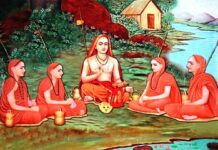