Home Vedas What is a Manvantara (मन्वन्तर) ?

Manvantara or age of a Manu (मनु), is a period of time measurement.

Each Manvantara is created and ruled by a specific Manu, who in turn is created by Brahma, the Creator himself. Manu creates the world, and all its species during that period of time, each Manvantara lasts the lifetime of a Manu, upon whose death, Brahma creates another Manu to continue the cycle of creation, Vishnu on his part takes a new Avatar, and also a new Indra and Saptarishis are appointed.

Fourteen Manus and their respective Manvantaras constitute one Kalpa (कल्प) or a “Day of Brahma”, according to the Vedic timeline.

Thereafter, at the end of each Kalpa (कल्प), there is dissolution or Pralaya (प्रलय), wherein earth and all life forms, but not the entire universe itself is destroyed and lies in a state of rest, which is called the, “Night of Brahma”.

Following are the fourteen Manus and their respective Manvantara  : 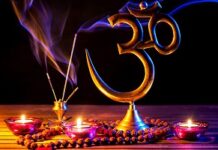