Home Mahabharata How did Bheem got his gadha and Arjun got his sankha ? 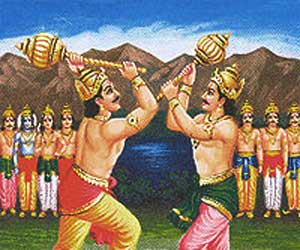 It is mentioned in Mahabharata – Sabha Parva – Chapter 3, Mayasura as a mark of devotion towards pandavas brought this gadha (mace) and Devadatta sankha from the kingdom of King Vrishaparva (वृषपर्वा) where these were kept.

सा वै शतसहस्रस्य सम्मिता शत्रुघातिनी।
That mace who destroys the enemies and is equivalent to one lakh mace.

There is also conch shell of god Varuna named as Devadatta, who has great sound. Let me bring those and offer to you.

He than offered that great mace to bheemsen and conch shell named Devadatta to arjuna.